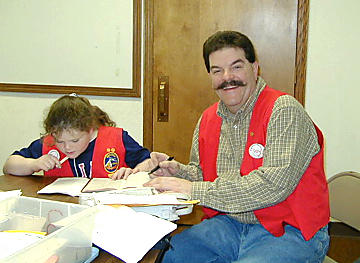 I’d like to invite you to take a walk through a typical club with me. It’s 6:30 p.m. and the leaders are all in place. They are early (not just on time), prepared with their lesson as well as prepared in their hearts to be used of the Lord. Each leader should be committed to being a Godly example and a role model to their JOY Club boys and girls. Each child is welcomed by name and given directions as to where to go and what to do. This club starts with prayer and song time. Can you see the excitement in their faces as they sing of God’s love for them? This is a smaller club, so all of the boys and girls are going to stay together for the Bible lesson and the memory verse. However, the younger children will not be required to learn the entire verse. Today, they are starting a unit on “Who Is Jesus?” and their verse is John 1:29.

It’s now time to divide into smaller groups and record the work that has been completed in each child’s handbook and to listen to their verse recitations. There is a lot of excitement as awards are earned for their accomplishments. Throughout their club years, points are accumulated toward the possibility of earning the “Golden Eagle Trophy” and then the “Higher Flights Plaque”. Tonight we are doing some simple relay races and are cheering one another along. Sometimes we have a little snack afterwards or at least a stop at the drinking fountain. It has been a great night and all of the children are returned to their parents until next week. (It is important for the leaders to be sure to have all of the records collected and to keep them updated every week so that we know what awards have been earned by each child.)

I hope that you enjoyed your visit in JOY Club. Come again!